Sewall Cecil Gagnan (first name pronounced SOO-uhl, second name with a soft 's' sound) was brought to the Sept by his kinfolk mother in October 2007. A chubby, imperious, and ruthlessly intelligent teenager, he was never quite the typical Ahroun, even if he was a more typical Silver Fang. Though not especially likeable, Sewall took his cubhood seriously and was self-motivated in regards to his education as well as eager to get said cubhood over with.

And yet, when he finally received his Rite of Passage, he faltered. Doubt gripped him (though he hid it well and spoke of it only to Zeke of the Furies and Derrick of the Silver Fangs). Eventually, Derrick -- who'd become Fang elder after Cedric was banished and Blackriver disappeared -- gave him a stay of execution, more or less.

Not long afterward, Sewall was sent to Earthspine to complete his education. He left sometime around March 2008.

He returned to the Hidden Walk in November 2012, nineteen years old and still Cliath despite the Rank event at the 2011 Winter Solstice. He carried with him a new auspice, a crippling collection of battlescars, and a fairly grim attitude.

His mother is notably absent. 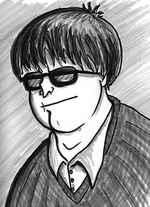 Homid
Add a photo to this gallery
Retrieved from "https://garoumush.fandom.com/wiki/Sewall_Gagnan?oldid=14395"
Community content is available under CC-BY-SA unless otherwise noted.