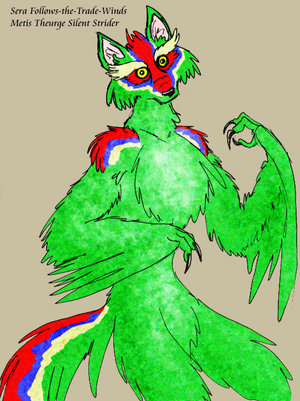 Strider Metis with a penchant for Weed, Alcohol, and various other things. She drives around in an old camper van and can be found in the city, or the woods. She has returned to the area, after being gone for over two years. Seems that she decided to take a trip up and down the Chilean coast.
The Strider is a veritable mecha of Rites. If you want to learn it, she can probably teach it to you.
(PB: 1 Uktena)

Sera is a Teacher of Rites by Trade. If you need to learn it, she can probably teach it to you. While I don't log her on daily, paging me as Val works for getting my attention. :)

Break With The Past, Captured Dreams, Feed the Earth, Gaian Boon, Gayatri, Greet The Moon, Greet the Hope-Star, Lughs Touch, Precognition, Rite Of Caffeination, Run With The Wind, Tobacco's Calm, Dance Of Lights, Prayer For The Prey, Reveal The Shadow, Sand In Shoes, Swarm Song

Descent Into The Dark Umbra, Fertility Rite, Rite Of Dreaming, Rite Of The Fetish, Rite of Man-Taint

Retrieved from "https://garoumush.fandom.com/wiki/Sera_Torrens?oldid=14899"
Community content is available under CC-BY-SA unless otherwise noted.