Somewhere in the low or mid-twenties, this man is of fairly average height and build - 5'9", athletic - and with dark hair and green eyes. He tends to wear dark clothes - they vary based on the weather and the situation, but he's not prone to bright colors or flashy things - and carries himself with a casual sort of easy confidence.

His features are --well, he's got a look that could be best described as 'rakish', with scruff on the jaw, a gleam in the eye, and easy grins. He's got the look of someone who is best described as 'trouble', and is a little rough-and-tumble. He's got a few tattoos - most of which can be covered up by clothes - and a thin leather cord hangs from his neck and disappears down the neck of his shirt.

Compared to other crinos, this one is a reasonably average specimen; massive, vicious, and a killing machine, though not particularly hulking compared to others of his kind. A darker grey coats his back, over his face in the usual lupine mask, and down to tip his tail; the rest fades into a lighter grey-white on his underside and paws. However, that's where the similarities to a normal wolf end: he has huge jaws, overhanging fangs, and massive paws tipped with huge claws. Though there are a smatter of scars on his hide, nothing appears particularly serious. Rage doesn't pour off of him like it does with some, but it's still ever-present; also, the creature radiates a certain standard of breeding that is unmistakeably Get of Fenris.

This wolf is a grey wolf, thick of coat and of standard markings for one of his breed. A darker grey coats his back, over his face in the usual lupine mask, and down to tip his tail; the rest fades into a lighter grey-white on his underside and paws. The wolf appears to be a healthy adult, though there are a smatter of scars on his hide, though nothing serious. 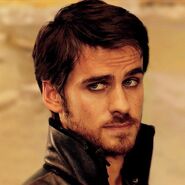 Add a photo to this gallery
Retrieved from "https://garoumush.fandom.com/wiki/Nathan?oldid=18027"
Community content is available under CC-BY-SA unless otherwise noted.