Mae Lynn O’Connell was born to low-income Irish-American parents living fifty miles outside of Chicago, Illinois on August 15, 1915. Mae's mother died shortly after Mae's birth, leaving her in the care of her father.

At the age of fourteen, she moved to Chicago with her father so that he could find better work. Soon after being educated about Garou-society, Mae's kinfetch appeared. She was brought to the Sept of the Wind Catchers where she was trained and eventually successfully completed her Rite of Passage. She served in a city pack until a pack was formed to guard an important Glen out in the northern suburbs.

Mae was out on her Fostern challenge when attacked by a powerful bane and forced off a guided path. She drifted through a number of Umbra realms before finally resurfacing in Saint Claire, WA nearly a century into the future. 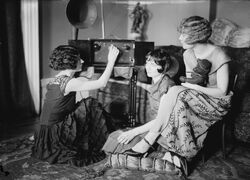 Some members from Mae's former pack (circa 1920's) 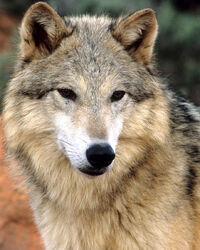 Mae's lupus form
Add a photo to this gallery
Retrieved from "https://garoumush.fandom.com/wiki/Mae_O%27Connell?oldid=18869"
Community content is available under CC-BY-SA unless otherwise noted.