Felix arrived in St. Claire along with Lilah, in July 2015 and a creatively-acquired mid-'70s Cadillac Eldorado convertible. They'd been driving around exploring the country for a couple weeks, and the Caddy finally gave up in protest and the middle of town.

He's previously from a sept in Memphis, has been staying at the Library since shortly after getting to town, and seems to have integrated pretty well with the Sept. He can often be found hanging out at said Library, poking around Edgewood or the caern, singing and playing guitar by the Harbor Park Fountain, sneaking in anywhere there's something resembling a party, generally trolling around town, or doing whatever else he's currently come up with as a good way to not be bored. Where 'good' translates as 'effective', not necessarily 'useful', 'wise', 'safe', or 'legal'.

Compact is the word for him: wiry, maybe 5'6" in his beat-up black combat boots, with a sense of compressed energy and imminence like a coiled spring -- or a cocked gun. Never quite still for long, balance flowing through the balls of his feet. There's a striking intensity to his narrow blue-green eyes, the colour contrasting with his fair skin and spiky copper hair; just below the left is what at first appears to be a faint mole, but closer inspection reveals as a small, long-healed scar. His features are appealing, with high cheekbones and a good jawline, but it's the confident mien and roguish smile that most often seem to draw people in. He frequently wears old black jeans with a rip in one knee and the cuffs half walked off, with an old but well-fitting t-shirt under an open button-down of some description and an old biker jacket over top of that if it's cold, but his clothes vary a fair amount -- particularly for a shifter -- with the main reliable factors being that the things he wears tend to fit and look pretty good on him, and almost never look brand new. There's usually a couple leather-and-bead bracelets on one wrist and a length of ball-chain disappearing beneath his collar, and his nails are frequently painted black; unlike the hair, clothes, and general hygiene, he's not particularly attentive to the polish, and it's usually chipped.

When he's in homid or glabro and not wearing a shirt, his tattoos are visible. On his left arm, just below the shoulder, is a parachuting rat holding a crowbar and wearing a pair of glittery-gold star-shaped glasses; on the right side of his abdomen, about where the waistline of pants sort of act as the ground, are a pair of rats with a mortar aimed up toward the left. Both tattoos are all in black (aside from the glasses) and resemble spray-painted stencils. His back is covered by a phoenix rising from flames, smoke, and ash, in suitably fiery colours and a completely different style. A reasonably close-up look reveals quite a number of scars worked into the design of that one; there are a couple under the mortar-rats as well.

He looks like he's most likely in his late teens, and when he speaks it's in a mellifluous, southern-accented baritone voice. When he sings, too, although the accent is fainter. Anyone with a good ear for accents (or who asks) can work out where he's from.

In his wolfier forms, Felix is still small relative to most other Garou. Like many Gnawers, his lupus form can be mistaken for a dog... although the tendency is probably to think 'wolfdog'. The colouring and conformation are all wolf, but the slightly smaller size and something about the energy and bearing (along with the likelihood he's in the city at the time) can lead to the other conclusion. 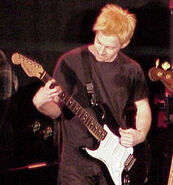 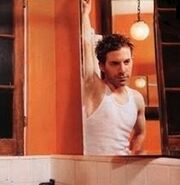 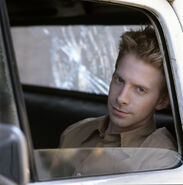 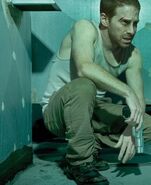 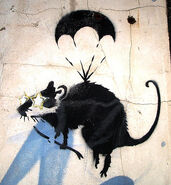 The Caddy, in her youth. She's blue now.
Add a photo to this gallery

Retrieved from "https://garoumush.fandom.com/wiki/Felix_T._Sinclair?oldid=18901"
Community content is available under CC-BY-SA unless otherwise noted.